Since the goal of Green Footprints is to promote environmentally sustainable behaviors, I vowed that in Vermont, I would make much more of an effort to engage people in what I was doing. Pretty soon after crossing that state line, however, I realized this might be a bit easier said than done; there aren’t a whole lot of people in the southern half of Vermont. But there is a lot of really beautiful forests. Dominated by the northern portion of the Appalachian range known as the Green Mountains, the entire landscape as far as I could see was a rolling carpet of green cut through with narrow, winding roads that led to tiny pockets of civilization nestled into valleys and hillsides. Passing through Manchester, I camped up an isolated forest road, following its dusty trail the next morning to run straight up a mountainside and then back down, all along the banks of a babbling boulder-strewn creek. There’s something eerily primeval about the Appalachians. Although lacking the imposing might of the towering Rocky Mountains, the Appalachians are much, much older; roughly 480 million years old, predating even land-based animal life. You get the sense of something ancient as you run under the looming tree canopies, catching glimpses of the rolling green landscape around every switchback as you climb up, up and up.

After planting some of the Blue Spruce seedlings, Turtle and I trundled south to Brennington, Vermont in search of wifi to set up for work for the day. The little town was the largest concentration of people I had seen so far in the state. My progress was marked by the turned head of nearly everyone along the street as I rattled along; bright green VW buses clearly weren’t a common sight around here. I spent the day bouncing between coffee shops, but it was obvious Brennington isn’t a huge hub for working remotely. The average transit time from entry to caffeine-fueled exit was less than two minutes, not exactly enough time to strike up a conversation about living happily and saving the planet. Slightly disgruntled at my utter failure as the day drew to a close, I scoped out some good forest roads and camping spots and headed east out of town. 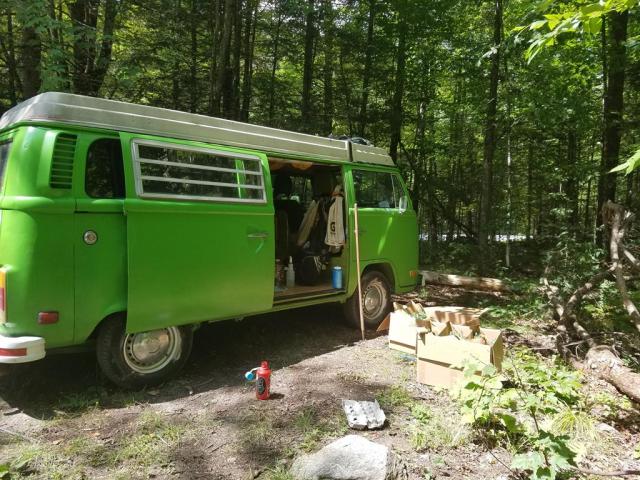 The next morning, after some running and planting, I was relaxing down by a large creek bed with a beautiful view of the mountains (and some windmills really far out; look closely at the top left corner in the picture below) when a group of four loud tank-top clad men burst out of the foliage, dumped an armload of bud light and tortilla chips in the sand, and proceeded to attempt to walk across the logs spanning the water, splashing and shouting as they inevitably fell in. Rather than be annoyed by the break in solitude, I saw this as the perfect opportunity to make up for the utter failure in engaging people the last few days. I walked over and started up the usual small talk (not something I’m a huge fan of or great at, but a necessary and important skill!), and learned that the group of friends was visiting from Boston, where they all lived and worked. They asked me what I was doing there, and if I had saw the ‘rad van’ parked up the road. Bingo! I told them about the project, and after a couple hours of conversation and getting to know them, I sent them with a couple little seedlings to plant at the house they were renting with the promise of sending me photos of where it was planted, and to keep in touch as I made my way south.

The next morning, with lots of time to mull things over as I finished my remaining Vermont mileage in one big chunk, I realized more than ever that while photos and blogs and messages were awesome for spreading Green Footprints to a big audience, the most meaningful interactions, both for myself and for the people involved, were going to be face-to-face. Seeing the excitement on the faces of the Bostonians yesterday, and watching them make what was clearly a much more concerted effort to pack out every scrap of trash they had brought down to the creek, had shown me that. I’ll have to continue working on that as we head to New Hampshire and Maine!

One thought on “Vermont-Leaving Green Footprints”