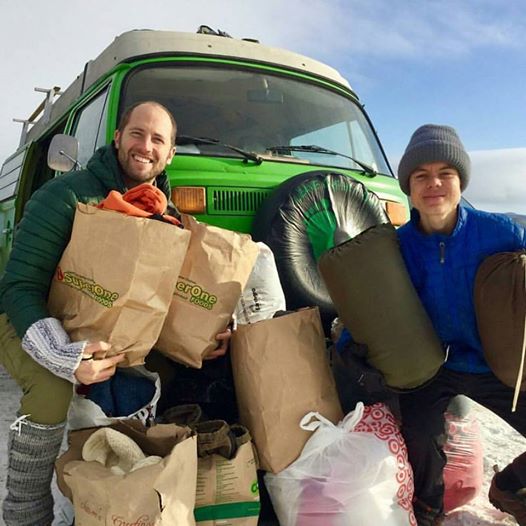 Leaving Omaha I passed through a countless number of small farm towns, each with its own unique character. In an effort to plug in with local residents as Turtle and I traverse the county running and planting, I’ve developed a habit of getting to know people through the owners of local Anytime Fitnesses, which are located in practically every town around the US. As I’ve mentioned in previous posts I’ve been a member of Anytime Fitness for a couple years now, and the gym has turned into a boon for traveling around, providing a safe place to exercise, shower and park for the night. It also turns out to be an awesome tool for engaging with people nearly everywhere I go. As each gym is locally owned, each owner or manager has a close connection with all of the local gym members, which provides a great holistic view of the area and a way to plug in with the residents. In Adel, Iowa (in which I ended up spending more time than anticipated working on never-ending van maintenance) I met Zachary, who provided me with a whole new perspective of these small, seemingly no-name towns. I have always regarded Iowa as an endless plain, flat, open, dominated by corn, and in every way– just plain boring. Zachary mentioned some of the traveling he had done, and that even after seeing all kinds of different places—beaches in Florida, some of the Appalachians in Georgia, forests in New York—he’d pick the open farmland of Iowa any day. “It’s so open, and big, I just love it. Cities, even trees—they make me claustrophobic. I like being able to see all the way to the horizon in every direction, it’s beautiful”, he said.

I was floored. Here I was, in the middle of nowhere. If you had asked me to come up with a state I was just totally unexcited about for Green Footprints, Iowa would probably be pretty high on the list. I had never thought of it that way before. On my run in the morning I looped around dirt roads rutted with the telltale signs of huge tractor tires, gazing over the empty fields not with a sigh of monotony, but with an appreciation for the wide-open view you might not be able to beat with anything short of a boat bobbing in the middle of the ocean. I headed south to plant the fifty White Dogwoods for Iowa in an already forested area, not wanting to ruin Zachary’s unimpeded view of the horizon in every direction.

As I headed north into Minnesota, the weather became quickly and steadily colder and wintery. With no heat in the van (the previous owner did me the luxury of removing the heater box when the rebuilt engine was installed. They must have lived in southern California. Or Florida.) and about as airtight as a cage of chicken wire, the actual driving was beginning to get pretty uncomfortable. Meeting up that evening with Rob Greenfield in Minneapolis, we loaded Turtle to the gills with jackets, scarves, hats and sleeping bags destined for the camps at Standing Rock, North Dakota. After a chilly run along the Mississippi River, we made a couple of quick stops at nearby Aldi’s grocery stores. Or, more specifically, their dumpsters. Two stops provided us with literally dozens of pounds of perfectly good, fresh fruits, vegetables and packaged foods, which we added to the supplies destined for North Dakota. It never ceases to amaze me the amount of good food that is trashed because of imperfections, arbitrary sell-by dates, or just to make room on the shelves.

After an overnight stop with some of Rob’s longtime friends in Fargo, ND, we were off the next morning, with driving becoming increasingly uncomfortable as the temperatures dropped and the wind picked up. I silently cursed the previous owner for the lack of heat (among other things, but I won’t bore you with auto-mechanical whining…) pouring from the engine into the front of the van, eyeing the empty space left beneath the dashboard on the passenger side. We were only able to make it to Bismark, ND that night, but were fortunate to be taken in by Dylan, a native Bismark-ian who was warm, welcoming and accommodating even at the last minute as we rolled into town just north of Standing Rock. In addition to the cold temperatures snow now dominated the landscape, having increased the farther west we travelled.

The next morning we hopped in and drove the fifty remaining miles down to the main camp at Standing Rock. Nervous about the police we had been seeing reported on the mainstream media, we were surprised when we rounded the final bend without having seen so much as a single squad car. The camp was quite a sight; an enormous expanse of teepees, cars, RVs and small wooden sheds stretching as far as I could see, cut through by the Missouri river. There were thousands of people! I had no idea the camp had grown so much, and it was awesome to see such a gathering of people standing up (no pun intended…) for the environment and their right to clean, uncontaminated water. 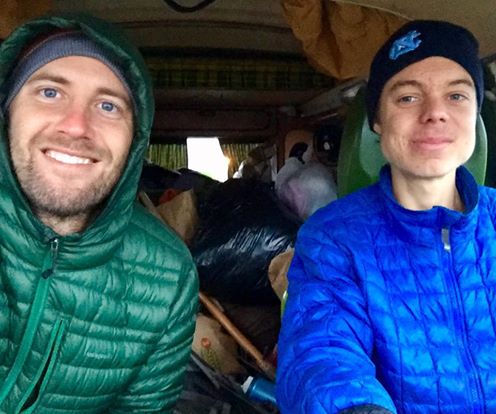 We rolled down the hill into the main camp, carefully navigating the narrow, ice-slick, makeshift roadways criss-crossing the camp. Over and over we had to back up and pick a new side path as Turtle slipped, slid and generally refused to traverse any incline on the slippery surface. Eventually we found a spot to park, and hopped out to check out the camp. After dropping the supplies we had brought at the closest donation station, Rob set off to obtain a media pass to begin sending back accurate reports of the true situation at the camps, and I set off to help the camp prepare and winterize.

A few hours later full of wood-cutting, snow shoveling, and chopping vegetables, I had interviewed dozens of people asking about the police brutality, checkpoints, fines and arrests that had been dominating the news about Standing Rock. Of everyone I talked to, not a single person had even met anyone who had had any trouble with the police. Although it didn’t surprise me, this stark example of the skewed portrayal of the situation by the media was pretty disheartening. At best it seemed they had been exaggerating the facts; at worst, it was a ploy to deter people from coming to the camps at all. At any rate, the camp was growing rapidly as the reported deadline for eviction of the camp on December 5th loomed just a couple days away. Nearly 2,000 veterans and other supporters had arrived so far, with up to another 8,000 expected before the end of the weekend.

Rob and I stayed with a freelance reporter from Houston, Derek, in a teepee across the Missouri river in the Sacred Stone camp. Despite the frigid temperatures, the teepee heated up nicely with some careful tending to the centrally located wood stove, and it was a pretty comfy place to stay the night. The next morning with weather reports becoming worse and worse for the coming week, I decided to head out earlier than originally planned; Turtle already wasn’t doing great in the freezing, icy conditions, and with subzero temperatures and lots of snow predicted, I didn’t want to be stranded in Standing Rock with no way to work on the van. I set my sights on some much warmer and less snowy areas of North and South Dakota to plant my White Pines, and headed south.