The few days of respite from the winter weather had worn off despite having travelled even further south as I woke up to a chilly, dew-soaked morning in Vestavia Hills, AL. Although not quite in the Appalachians, Vestavia Hills is quite aptly named; I was constantly down-shifting as Turtle struggled slowly up the steep inclines of the neighborhood hills while I made my way over to Hoover High School. I had spent the morning running around Red Mountain Park, navigating forested trails that crisscrossed through the remains of abandoned mines and crumbling stone structures. I was rewarded after one especially long climb by a soaring overlook off of a ringed platform built around an ancient Oak tree, accessible only by a narrow, planked rope bridge like the treetop Ewok villages from Star Wars.

To my surprise, I found that Red Mountain Park is not a funded state or national park, but rather a project born out of a committee called the Red Mountain Greenway and Recreational Area Commission to preserve the natural environment and history surrounding the area. As a nonprofit, it is fully funded by donations and revenue generated by some of the various activities available around the park such as bike rentals and a ropes courses. It was encouraging to see such a project spring up solely from the volition of a group of concerned local citizens, and is an excellent case study on how to create and maintain an entirely self-sufficient park. From now on, this area will not be threatened by the expansion of the numerous businesses and warehouses nearby, and will continue to provide people with a natural escape in the middle of this urban area. With the current threats to our government park systems and natural resources, Red Mountain Park may serve as an important model on how to preserve some of our cherished natural environments around the country.

Later that morning I puttered up the bus loop of Hoover High School, Turtle dwarfed by soaring columns framing the entrance like an ancient Gr 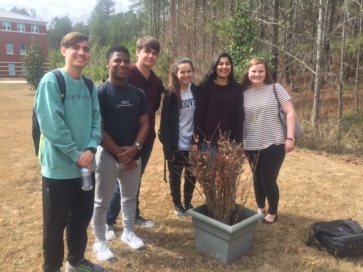 eek coliseum.  I hoisted the container of Red Oak seedlings nestled in about 30 pounds of soil and struggled my way up endless flights of stairs, wandering down the hallways and trying unsuccessfully to look like I knew where I was going while I struggled to remember the directions given to me by the front desk. I finally arrived at the correct room and was greeted by a bubbly and enthusiastic Mrs. Ort, who flew past me out of the room as I struggled to keep up with both her quick pace and instructions. We had a busy day ahead! I made a list of mental notes as she energetically sketched the outline of the programs: four classes, two planting
locations, a morning news crew, data that would be used for a future lab for her students. I did my best to match her quick tempo throughout the day as we zipped between classrooms, school grounds and tool sheds with various groups of environmental science students, most of which were engaged and excited to help (which had nothing to do with 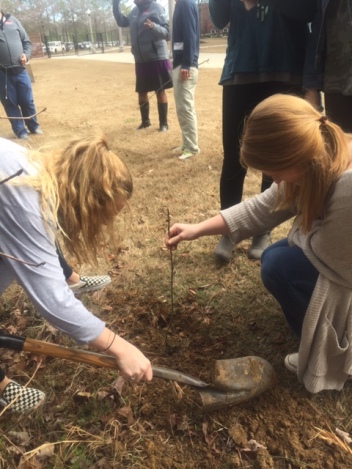 my program getting them out of their quiz for that day, I’m sure). By the end of the day we had successfully planted the Red Oaks around the school campus, interviewed with a local news crew, and spoken to hundreds of students about some of the changes they can make to live a little more sustainably. At the suggestion of Mrs. Ort, I provided the students with the current data map for Green Footprints which includes the locations, amounts and species of the project to date, which they will utilize in an assignment to calculate the estimated carbon offset of the project. You can find this map on the website under ‘Our Progress’ in the ‘Green Footprints Project’ tab. Huge thanks to Mrs. Ort and all the Hoover High School students who participated; it was a blast! Check out the news coverage of the program here! 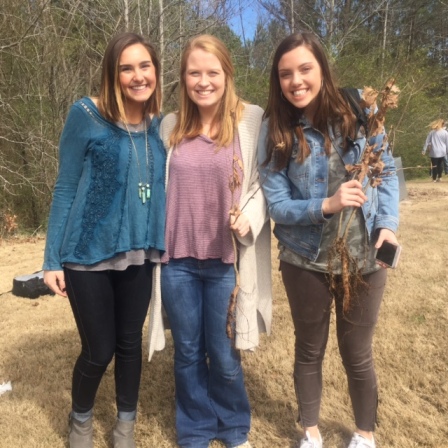 This week, I challenge you to check out a local park or conservation area that you haven’t visited before, and to get out and experience it! Go for a run, hike or bike ride and unplug from the craziness of everyday life. It’s important that we all foster an appreciation for our natural areas, whether we live in the heart of a bustling city of a rural cabin miles away from the nearest road. We’d love to hear from you; comment below on your favorite parks and how you make the most of them!