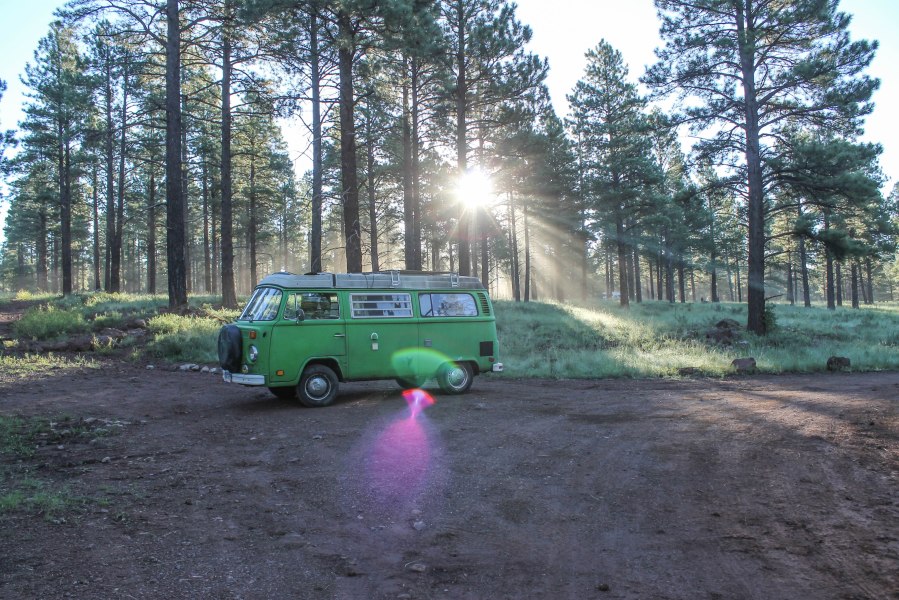 After the desert landscape of Utah, the endless Ponderosa forests of Arizona seemed lush in comparison. Towering yellow and red canyons and rock faces gradually gave way to the mountainous pine-topped peaks of the northern Kaibab forest. I spent the first night in Arizona under the stars with little wisps of snow floating down, despite temperatures that shouldn’t have allowed for that—but weird thing happen when you get up above 7,500 feet. After a run the next morning through winding, hilly forest service roads, I made my way down into the city of Flagstaff, AZ. Nestled in the southern portion of the Colorado Plateau, the area has a remarkable diversity of geologic features ranging from volcanic lava tubes to meteor craters to the peaks of San Francisco Mountain. It is also an awesome place to camp, with miles of winding dirt service roads crisscrossing the extensive BLM areas just south of the city.

Early the next morning I met up with Tony, who I had met the previous year at a VW get-together that ended up in a caravan of Kombis trundling down a bumpy dirt path off Lake Mary Road (scroll down and read ‘The Spark’ from 6/10/2016 for more about that). After speaking to his math and science students at the Flagstaff Junior Academy, we got everyone in the Green Footprints spirit by running a mile around the scenic lake path behind the campus. With a little lesson on tree anatomy and the best soil and environments to plant in, small groups of students then broke out with shovels and Ponderosa saplings to plant new trees around the campus. The day concluded with everyone taking home their own little Ponderosa, the root-and-soil plug carefully wrapped in moist paper towels for the transit to be planted at each student’s home as a reminder that they, too, can make a difference, one ‘step’ at a time. 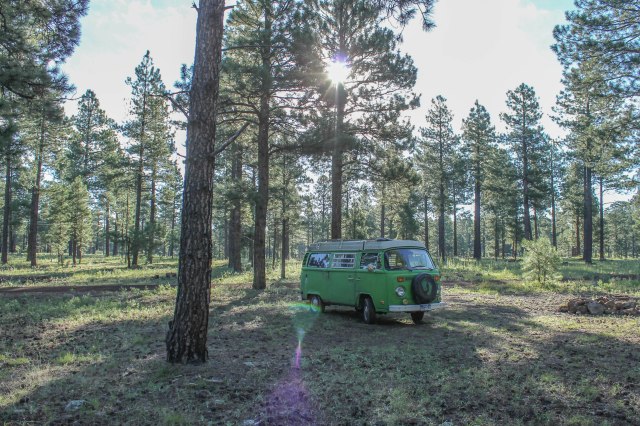 I enjoyed a few days of running and exploring the pine-dominated BLM lands near the city, and of course, couldn’t pass up a long run on the iconic Lake Mary Road—‘the stomping grounds of Olympians’, as put by an old friend and Flagstaff native. Soon I was back on the road headed east towards Los Alamos, New Mexico. I had been contacted a few months before by Kevin, who had come across Green Footprints and wanted to involve his high school’s Eco club, even publishing an article about the planned event in their local paper. I met up with him early the next morning for a run and a full day’s schedule for planting some trees.

If I thought Flagstaff was high up there, I was in for a surprise. Los Alamos is cut through by towering peaks and steep valleys, and it seemed to me like every highway rode along the edge of a cliff. My first run in Los Alamos started at 9,000 feet and went up from there, leaving me gasping for air and questioning my proudly held ‘altitude acclimation’ from a summer of training in Boulder. I’d like to say the views were beautiful, which they were, but truth be told—I was pretty much singularly focused on finishing in one piece. 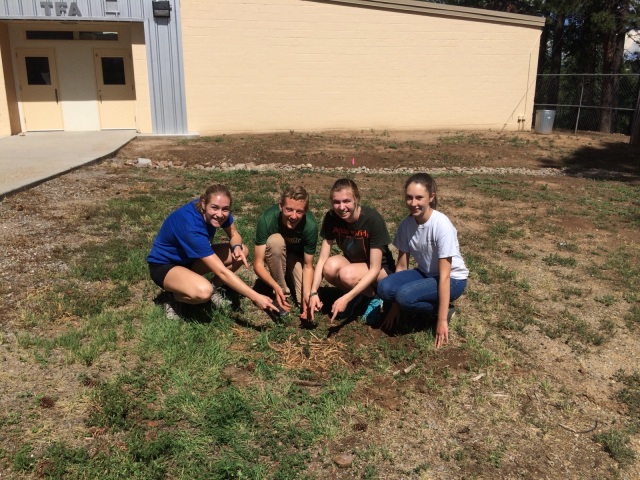 After the run Kevin and I were joined by a few other members of the Los Alamos Eco club, and we kicked off the day with shovels, soil and 20 Ponderosa saplings at Chamissa Elementary. From there we moved on to Los Alamos High School, where we planted the remainder of the trees around the campus. It was great to work with a group of young people actively interested in helping to preserve their local environment, and to see that the spirit of sustainability isn’t always quite as few and far between as I sometimes think. I would also like to thank the Los Alamos High Eco club for their generous donation to Green Footprints, which helped to fund three states from their contribution alone.

For your sustainability challenge this holiday, I task you with being a little more ‘green’ with your Christmas decorating and gift-wrapping. Instead of shiny, plastic-coated wrapping paper, consider using newspaper, reusing wrappings from previous years you may have saved, or using gift bags, which can be reused later. Hope everybody has a happy and Green holiday!